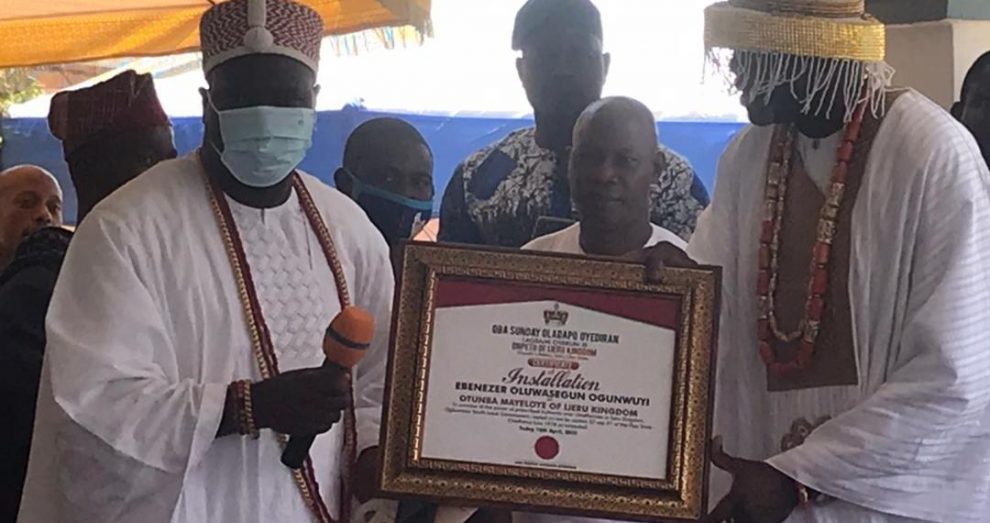 The Director General, Oyo state Investment and Public and Private Partnership Agency (OYSIPPA), Hon. Segun Oginwuyi has been installed has the Otunba Mayeloye of Ijeru Kingdom in Ogbomosho, Oyo state.

Governor Seyi Makinde who graced the occasion on Saturday called on monarchs to always bestow chieftaincy titles to Nigerians of credible character; stating that installing such people will motivate others to buckle down on rendering good services and being better representatives of their people.

Makinde extolled the virtues of the OYSIPPA DG, describing his installation as Otunba Mayeloye and his wife as Yeye Mayeloye of Ijeru Kingdom as a well-deserved honour.

Speaking at the Lagbami Oseku Hall, Ogbomoso South Local Government, Arowomole, Ogbomoso, Engr. Makinde said that Ogunwuyi is one of the future leaders of Oyo state and Nigeria.

Makinde stated that Hon. Ogunwuyi has an enviable track record, adding that his impact at the State House of Assembly is still being felt, years after leaving.

In Makinde’s words: “First, I want to say that this honour is well- deserved and I want to thank God that one of us is being honoured at his homestead. They do say that prophets are usually not honoured in their homes but this one is honour at the grassroots.”

Reacting briefly to the outcome of the zonal congress of the People’s Democratic Party scheduled to hold on Monday 12th April, 2021 in Osogbo, Osun State, the governor said that Ambassador Taofeek Arapaja will emerge victorious in continuation of the honour done to Ogunwuyi.
“You would have been having a premonition about what will happen on Monday (in Osogbo); the Mayeloye title will really be made manifest in Arapaja as he would emerge the Chairman.”

“I am glad that one of our own, who is also one of the future leaders of this state and country us being honoured at his home base.”

“We have seen people who stole money and were also honoured with titles. But the personality to whom Kabiesi is giving this title today is one who is having impact in the lives of our people in the state.”

“He has served at the House of Assembly with good track record.”

“He has also served as a Honorable at the Federal House of Representatives. I searched for his records and observed that he served meritoriously. Since we got into government, I can confirm that he is trying his best for the government of Oyo State as DG of OYSIPPA.”

“So, I want to beg our Kabiesi to always honor people like Honorable Ogunwuyi so that they can encourage others to serve our state.”

Speaking at the event, the Onpetu, Oba Sunday Oladapo Oyediran, Lagbami Osekun III, made it known that the governor has started well by delivering dividends of democracy.

He also prayed that the Almighty will continue to direct the governor to deliver more developmental strides to the people of the state.