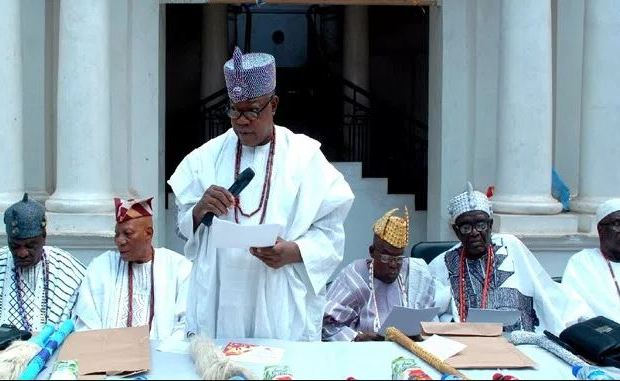 The Olubadan of Ibadanland, Oba Saliu Adetunji, has told the estranged Ibadan High Chiefs that they would have been banished from the land, if he accedes to the request of the people of Ibadanland, due to their unlawful acts which he said are capable of destroying the age-long traditional system.

Oba Adetunji in a letter he personally signed on Wednesday and addressed to the estranged High Chiefs faulted the attitude of the High Chiefs, which he described as unbecoming.

The paramount ruler of Ibadanland, who condemned the aggrieved High Chiefs for their alleged penchant for illegality, lawlessness, and absurdity in the use of obaship title, told the high chiefs that what they did was equivalent of a coup to disrupt the smooth flow of Ibadan chieftaincy system and are liable to banishment.

According to the first class traditional ruler , the High Chiefs were not only rude in the letter they wrote to him on January 27, but lacked royal etiquette.

” If you have a teachable spirit, putting a letter meant for Olubadan in the public domain before it eventually gets to him is indicative of your tacit lack of royal etiquette,” Oba Adetunji said.

He stated that for the avoidance of doubt, the so-called Ibadan Oba – In – Council is not known to the law, much or less the custom and tradition of Ibadanland.

The letter reads: ” We read extracts from your letter of 27th January 2020 on Newspaper pages before receiving it at 2.45 pm on Monday 3rd February, from Kamoru Liasu, the secretary, Olubadan-in-Council. If you have a teachable spirit, putting a letter meant for Olubadan in the public domain before it eventually gets to him is indicative of your tacit lack of royal etiquette. As if this were not enough, you had the impudence of writing this same letter on the Ibadan Oba-in-Council letterhead.

” The so-called Ibadan Oba-in-Council is not known to law how much or less our Custom and Tradition. Even in the content of your letter, you referred to yourselves as members of Olubadan-in-Council. This shows absurdity unbecoming of High Chiefs of Ibadanland.

” We should not have dignified you with a reply if not for your fruitless but desperate effort to absolve yourselves from the damage you collaborated with the immediate past Administration of Senator Abiola Ajimobi to inflict on our traditional patrimony. What you did in the name of chieftaincy review along with that administration was equivalent of coup calculated to disrupt the smooth flow of the Ibadan chieftaincy system. Unfortunately for you, the coup failed. As a matter of fact Ibadan people were demanding your banishment from the city. This is a recent history which no one can twist, bend or manipulate as you have shamelessly sought in your 4-page letter. Thankfully, our people have expressed their reservations and today we are savoring the joy and victory of a new dawn in our traditional institution’s history.

” When we said the other time that our battle is over, some of you who were so obsessed with unlawful use of Obaship title and illegal wearing of crowns and coronets could not read between the lines. By the stroke of pen, somebody created a crisis situation in our chieftaincy system, by the same token, somebody created sanity and normalcy has returned.

” As the Olubadan of Ibadanland, I do not carry out the statutory duties of high chiefs nor obstruct anybody from performing his duties, but when we send out invitations for meetings, it is you who choose which ones to attend or not. As nature does not abhor vacuum, life continues. But it is the same invitation that we extend to you that we also extend to other high chiefs such as Osi Olubadan, Ekerin Olubadan, Ekerin Balogun, Ekarun Balogun and Iyalode who did not sign your letter of grievances. Thankfully, more and more people are beginning to repent.

” Our style of administration in the palace which you complained about is not in any way different from the style elsewhere. If you are invited to a council meeting at 11.00 am and arrive at 1.30 pm when the Olubadan is already seated without prior notice of your late coming, this is indiscipline and is punishable. It does not matter whether the offence is committed by one, two or more high chiefs. It becomes suspect when three or four of you are coming at the same time to the council meeting. In the same vein, it is beyond the duty of high chiefs to set agenda for meetings, especially when there is demonstrable evidence that separate meetings have been held at Mapo before coming to Popoyemoja. So, there is nothing unprecedented in your experience with me as your leader. It is your own actions that are unprecedented. Nowhere in Ibadan history have High Chiefs ever been politically influenced to be agitating to become Oba without domain. No Oba in Yorubaland has no domain.

” As a matter of fact, we have created a more enabling environment for you to function as High Chiefs if you would be true. So, I won’t know about the public opprobrium to palace actions, which you talked about in your letter.

” Contrary to your opinion in the letter that the controversy generated by the review of the Ibadan Chieftaincy Declaration was needless, this is not true. You and I who were members of the old Olubadan-in-Council would recall that gravity of the reservation of Ibadan people to former Governor Adebayo Alao-Akala’s review and subsequent promotion of six Chiefs in Ibadan less city to crown-wearing status. Governor Akala backed down as a concession to public outcry. But, my son, former Governor Ajimobi who did not consult us nor rely on our recommendation before crowning over forty has suddenly become needless, apparently because you have benefitted from it since the ill-fated chieftaincy review, you have placed me in a most uncomfortable situation of having to plead with our people at social functions, especially where the police presence is not heavy to let you stay with me because as far as they are concerned, you are a pariah. If truth must be told, common people call you “Oba alade pali”, “Oba alade Shoprite”, “Oba alade Sunday”. In fact, you have become a butt of jokes in Yorubaland.

” As a law-abiding monarc, when former Governor Ajimobi issued gazettes saying we should not confer traditional chieftaincy titles beyond Ikolaba, we obeyed him even though we were not happy with it. When His Excellency, Governor Seyi Makinde came in and listened to our people that we should return to the pre-Ajimobi chieftaincy review era, the gazettes were set aside in the consent judgement in suit No M/317/2017 between High Chief Senator Rashidi Ladoja vs. Governor of Oyo State & Ors. We immediately recommend your elevation as High Chiefs in accordance with Section 22 Subsection 2 CAP 28 Laws of Oyo State 2000 as the prescribed and consenting authority on all chieftaincy matters in Ibadanland. And His Excellency, Governor Seyi Makinde graciously approved it. We were all at meetings to witness the promotion exercise and rites on 20th December, 2019, wherein High Chiefs affected prostrated thrice before taking Akoko leaves. Do kings prostrate to take chieftaincy titles with Akoko leaves.

“We are equally surprised that after participating in the elevation of Mogaji to Jagun and other ranks on Friday, 3rd January, 2020 and getting your own share of the rites; you could turn around to distance yourselves from it. If this is not a double standard, what is it? You referred to your two misconceived Suits No 1/22/2020 and 1/23/2020which were filed on 10thJanuary, 2020 and were only served on the Governor of Oyo State and High Chief Rasidi Ladoja who were Defendants on the 28th of January, 2020. It is instructive to note that the Olubadan of Ibadanland is not a party to either of the cases. Can you now see the futility of your action?

” As for the appointment of the new Araba of Ibadanland which you complained about, High Chiefs do not take part in the appointment process of Araba if you are not part of them. It is the exclusive right of Babalawos, when they pick their leader, they present him for ceremony and this is what you have been invited to witness, which you spurned.

” It is very interesting to note that you claimed that your counsel legally guided you. If you are well guided in law, you would have known that with the consent judgment, your wearing of the offending crowns and calling yourselves Obas amount to contempt of court and a Declaratory judgment cannot be stayed.

” All these and many others are things to learn little by little if you do not abdicate your responsibilities by staying away from the palace. On our part, we promise to look into genuine complaints if you have any.”