Alhaja Wuraola Asake Kola-Daisi, according to his son, Chief Rotimi Jogunosinmi died at the age of 86.
Chief Rotimi Jogunosinmi, a Mogaji of Jogunosinmi compound, Oja’ba who made the announcement on behalf of the family, said the Iyaloja will be buried today, Thursday at her residence, on Ring Road, Ibadan near D’ Rovans Hotel, back of Omo Gafo building Ibadan by 4pm.

The late Iyaloja of Oyo State was inaugurated in 2008 by the then Commissioner for Women Affairs, Social Welfare and Community Development, Mrs Deborah Oyelade during the administration of Governor Adebayo Alao-Akala.

Chief Jogunosinmi expressed appreciation to the family members; the Oyo State Market Leaders Council; the South West Coordinator, National Association of Nigerian Traders, Mrs Odunayo Omokayode Danjuma and the Iyaloja of Ibadanland, Alhaja Risiwat Ameringun for their supports to Alhaja Wuraola Asake Kola-Daisi during her reign as the Iyaloja of Oyo State. 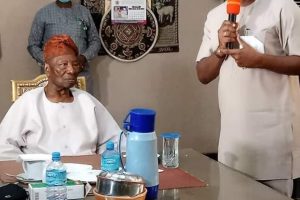 A Year After Makinde’s intervention, NUC Transfers Ownership Of LAUTECH To Oyo State