Hoodlums under the pretense of activism, on Sunday, attacked Mokola police station and attempted to set it ablaze.

The hoodlums known as ‘Interior Boys’ carried out a coordinated attack on the Mokola community and its environs and also attempted to burgle shops on Mokola streets before they were resisted by the Mokola youths in a fracas that lasted for hours.

In the process, a boy whose name is yet to be identified sustained a gun injury and died instantly.

Speaking further, the witness confirmed the death of an innocent boy who was hit by a stray bullet why the crisis was ongoing.

The witness, however, couldn’t establish who fired the gunshot that killed the boy. He noted that the corpse of the boy was brought to Mokola Police Station by the hoodlums thinking he was shot by the police.

During the process, some of the hoodlums attempted to burgle shops on Mokola streets, a development that triggered the anger of the Mokola youths who later mobilized in their hundreds to repel the hoodlums from setting the Mokola police station ablaze and looting shops under lock and key.

The source added that a police inspector at the Mokola police division was hacked, while some office appliances were carted away by the hoodlums.

As at the time of filing this report, the operatives of the operation burst, Mobile police and Civil Defense have rounded up Mokola area and its environs, while some of the hoodlums have been apprehended.

You would recall that hoodlums have been looting private and public valuables since last week due to the aftermath of the #EndSARS campaign against police brutality which was not properly managed. 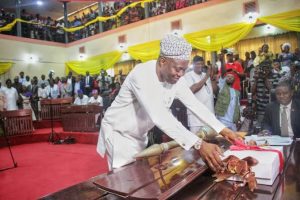 Just in: Fire Razes Shops At Sasa Market In Ibadan