Unless you have been living under the rock or in some remote remote land which has not been discovered by Nigerians, you must have heard about the one who has been described as a “reflection and embodiment of what Nigeria needs at this time,” the one whose friends and foes alike call GSM, THE Governor Seyi Makinde of Oyo State.

In just six months, he has shown that a person can get into political power and not get infected or changed by the political air in Nigeria. The air that causes amnesia, making some leaders forget their promises. In others it fosters disdain, making them treat the populace with contempt. He has shown that the little things that matter are what grow to become the great things that bring about change.

Seyi Makinde has started doing the little things that when properly harnessed, will grow into great things. It is no news that the Governor of Oyo State acts like a man on a mission. Ever smiling yet clearly meticulous, he has repeatedly stated and demonstrated that the buck stops on his table. A few weeks ago, he was caught on camera removing refuse from the streets of Ibadan, clearly showing that if one of the men he picked drops the ball, he is ready to pick it up and do the needful.

Also, on my timeline the other day I saw a tweet about streetlights coming on at Ibadan tollgate amid wild jubilation. I wondered why people would be jubilating over something so little until I heard the full story. Those lights had not come on in twenty years. To put it in perspective, if I lived close to the toll gate and had my children there, none of them who are presently old enough to be in the university would have ever seen that street light come on. For people starved of the benefits of governance, even the little things are significant.

Having been a teacher of teachers for close to two decades, I know the importance of having a leader that understands the importance of education. I have written in the past about how Nigeria always uses the education ministry to reward cronies. So, imagine my joy when I saw that education was one of Engr Makinde’s four pillars of development. And the passion with which he is pursuing policies of not just free but qualitative education in Oyo State. Recently there was a training for school principals. I am hoping that when the training for school teachers come, it will be based on the latest research on educational development and that emphasis will be laid on curriculum content and teaching methodologies.

And then again, I saw his meeting with the students of LAUTECH, a school that has suffered abuse over the years in the hands of leaders. The sincerity with which he spoke to the students and the respect he accorded them. He made conditional promises, and they screamed with joy because as someone later explained to me, “If GSM has said it, it is done.”

I have seen tweets saying that he has been paying online influencers to sing his praises. And so, I did a simple search of the name Seyi Makinde on Twitter and what I saw convinced me that if indeed he has been paying people to sing his praises, he must have bottomless pockets. I doubt that the N48billion in assets he declared would be enough to keep feeding these “influencers.” And I wonder why other people that badly need such “washing” have not taken advantage and used similar tactics.

The facts remain that Governor Seyi Makinde has come from the private sector with a different approach to governance. A system he called, in one of his speeches, a hybrid of “a top-bottom approach which relies on leadership setting the goals and then breaking it down for implementation” and a “bottom-top approach where the citizens play a role in determining what the goals should be.” He came with a clear plan of what he wants to do for the people of Oyo State, but is still taking time to listen to the people and take into consideration their recommendations as he did during the Budget Town Hall meetings.

I must confess I am not from Oyo State. But I follow people from Oyo State and I read every bit of news from the state partly because @Ose_Anenih will not stop tweeting about him and the other partly because Google keeps putting Oyo State news in my face. The last that caught my attention was Governor Makinde appointing someone from Kano State as an Aide that will serve as a bridge between the Oyo State Government and the Hausa/Fulani community and others of Northern extract. Given the reported clashes between herdsmen and farmers in Oyo State, this is a brilliant show of emotional intelligence. Seyi Makinde deserves the accolades he is getting.

It might be morning yet on creation day, but my people say that we will judge how the day will progress by how the morning begins. If we go with that saying, then Oyo State is headed in the right direction. I hope that GSM will stay with his manifesto -Roadmap of Accelerated Development for Oyo State. I am sure he knows that it is not just the people of Oyo State but the entire nation watching. We are looking at his manifesto and checking promises and matching them with the timelines that he proposed.

Personally, I am waiting for one or two things before I complete my transition to becoming an Oyo State settler. I hear tourism potentials are huge. They also have a robust reading community, and so I should fit right in somewhere in the city, or even in the rural areas. I may yet take advantage of his agricultural plans and look up how I can become a resident of one of the Farm Estates he is using a N7.6Billion loan to develop. If those estates are anything like what it looks like on paper, then count me in!

I am right now thinking of a middle name that will work very well. 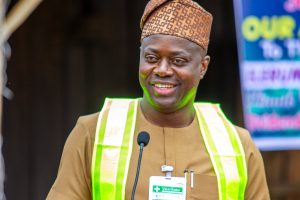