Adebayo Alao-Akala, who was governor of Oyo State between 2007 and 2011 has revealed that there is a big deal in the appeal filed by Adebayo Adelabu, candidate of his All Progressives Congress, APC, against the victory of Seyi Makinde, incumbent governor of the state.

Adelabu had proceeded to the Supreme Court, to appeal the judgement of the appeal court. The tribunal had thrown out Adelabu’s petition for lacking merit. But the appeal court, after evaluating Adelabu’s evidences that were not evaluated by the tribunal, affirmed Makinde’s victory.

But the Ogbomoso-born politician, who spoke in an interview with Nigerian Tribune, said members of the ruling PDP are getting it wrong by saying thinking that it will be easier for them to get the status quo maintained by the court.

According to him, “They are getting it wrong, there is a big deal. What I don’t know is this, I am not a lawyer but as things stand now, I don’t think anybody can claim victory yet. Law is an ass; it can swing to anywhere. I don’t know what the judgement would be but there is a cause for alarm. There is fire on the mountain.”

Talking about his role in the 2019 elections, Alao-Akala said he is not disappointed by the outcome.

“I do not feel disappointed. Do you know why? Up till about two months ago, the party was in crisis and as such it was not possible for us to speak with one voice. But the truth is that it is politics; nothing more than politics. Everybody that has conscience must be pricked by their conscience. With due respect, in politics there must be patronage. In patronage, you will be able to keep the structure. I won’t say more than that.”

He added that he is not feeling like a big fish in a strange water.

“No. That can never happen. Politics is local. By the grace of God today in Oyo State politics, you cannot count one to four without counting Akala. I don’t need Abuja to be a politician in Oyo State. Rather, Abuja needs me to achieve certain political objectives of who wants to be at the seat of power in Abuja. But, I don’t need Abuja person to be what I want to be in Oyo State.”

As the 2023 beckons, Alao-Akala doesn’t have his eyes on anything.

“I don’t have my eye on anything. Apparently, I don’t want to be governor again. I want to advise. Let me say I am not playing politics because of any position any longer but that does not necessarily mean that I can refuse a worthy responsibility.”

On why he dropped his ambition for Adelabu, he explained that “First of all, there is dynamism in politics. If you stand still, you could be swept away. There is no basis for comparing what happened in Osun State with what happened in Oyo State. I did not have anything to trade away. By that time, it was obvious that none of us would be able to win that singlehandedly. But as a politician, my calculation was that Adedibu would win that election. If in that election our party already got two senators and seven or eight House of Representatives members, I needed to boost the image of .Adelabu. My aim was not to be governor at all cost. There are some people who are not governors but are more powerful. I said look at this young man and I went for Adelabu. Let me tell you on fact, when people approached me in politics for help, people were talking of pecuniary gains – money exchanging hands – definitely, if we were to win, I would demand some things. I might have other vices but the patriotism in me will not allow me to trade my integrity for a pot of porridge.”

He, however, said that the presidential system of government is too expensive and unsustainable for Nigeria.

“I agree. I think we should revert to parliamentary system. All the noise about restructuring is unnecessary. In parliamentary system, you must first be in the House before you become a Prime Minister. Ministers will also come from within the parliament. Again, the ministers and the parliamentarians will be taking the same salary. It is cheaper. It will not be about geo political zone; the House would decide who would be who. Every party would need one another to form a government. If this is so, it means that we would have participatory leadership. One thing people don’t know is this. This presidential system that we are practicing will not last. If we don’t change the system, the next generation will force a change on us,” he added 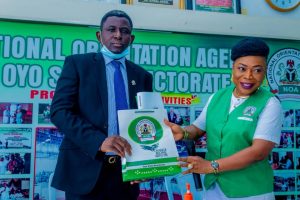